Sunday was a bit of a sad evening, as it was the last concert we will see for awhile from Les beaux Chapeaux.

I sincerely hope they will return again one day and continue to bring us joy with their music. We shall miss them very much!

Lhinnthel had fun after Monday Night’s Ales & Tales with several kinnies. We swam with the stars at Dol Amroth and found a lovely glitchy wall that Naethril, Tulenn, Byrcha, and I had a way too much fun with =)

Lhinnthel also went on Thursday Night Adventures to Dol Guldur! An odd sight to see, was a fellow elven hunter with some sort of invisible leg sickness!! Strange indeed!

She also decided it was high time to return to Central Gondor. Valar knows they do need her aide as they are in dire circumstances! She is working hard to earn their trust and gain a better reputation. She’s also been polishing up her bow and dagger in preparation for upcoming updates!

Avlina received her first Legendary Staff and Book of Lore! She also made it to level 55 and is now adventuring in the depths of Moria! Mostly with her bear Almarae or her bog guardian, Nod. She even learned how to throw a deathly Ring of Fire at her enemies and it makes them run squealing with fear!

She was fairly sad about not getting the /toast emote from the anniversary festival, but there is always next year! The Lovely Woodland Realm Steed was a welcome addition to her stables!

Briewson and Iaroel, of my alt kin, have been getting quite close – they started questing together in the Marshes of Bree-land and on into the Lone-lands.

Briewson is questing in order to raise enough funds for a proper brigand outfit for an upcoming part in a play! How exciting! Iaroel just wants to get enough experience with her instruments to be allowed to play the bagpipe!

They’ve so many tasks need done in the Shire an’ I was on my way ta pick up some pies fer delivery when Miss Dora stopped me an’ started cryin’ about some lost chickens.

So, I had a heck of a time tryin’ ta catch them all fer the distraught lady. Finally the good deed was done an’ all them cluckers was returned ta the coop safe an’ sound.

About that time, my brand new green tunic was spoiled an’ all covered in dirt smudges! Well, there was nothin’ ta be done about it, so I jus’ sighed an’ shrugged an’ decided ta get a cool drink at the Green Dragon Inn.

Imagine my surprise when the inn was burstin’ with music an’ a party! It was green Dragon Friday!! Wow! I had such a grand time an’ got ta hear a poem about Miss Lina Willowwood’s gardenin’ woes an’ even got ta hear the Thorns an’ Roses playin’!!

There was news an’ dancin’ and so many hobbits that the room was full of laughin’ and talkin’ an’ even some dwarves showed up complainin’ about there not bein’ a drinkin’ contest! It was such a charmin’ afternoon an’ I’ve got ta go back someday soon! I most definitley want ta visit again fer The Forest of OAKS event on May 17th, it sounds like even more fun ta be had!

An’, I finally did get one o’ them pies delivered to Hobbiton! yay! 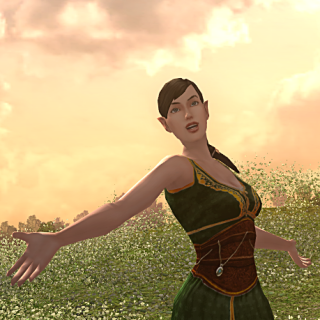 My grammar is shameful, my thoughts fragmented and I truly do love pie.